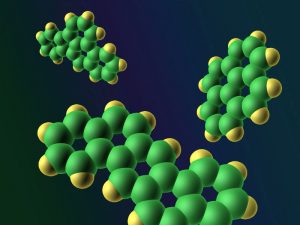 PAHs are often byproducts of petroleum processing or combustion. Many of these compounds are highly carcinogenic at relatively low levels. Although they are relatively insoluble in water, their highly hazardous nature merits their positioning in potable waters and waste waters.

What happens to polycyclic aromatic hydrocarbons when they enter the environment?

Exposure to polycyclic aromatic hydrocarbons usually occurs by breathing air contaminated by wild fires or coal tar, or by eating foods that have been grilled. PAHs have been found in at least 600 of the 1,430 National Priorities List sites identified by the Environmental Protection Agency

Polycyclic Aromatic Hydrocarbons (PAHs) are chemical compounds that consist of fused aromatic rings, and are one of the most widespread organic pollutants. Some are known or suspected carcinogens and are primarily formed by incomplete combustion of carbon containing fuels such as wood, coal, diesel and tobacco. They are also found in comets and meteorites and produced by volcanoes and forest fires.

Most PAHs do not dissolve readily into water but they stick strongly to soils and sediments. Major industrial sources of PAHs include primary metals processors, petroleum refineries, and paper, chemical and plastics manufacturers. There are more than a hundred PAHs, and because they have so many sources, PAHs are found widely throughout the environment. Some are known carcinogens, (benzo(a)pyrene was the first chemical carcinogen to be discovered) and others suspected carcinogens.

Polycyclic Aromatic Hydrocarbon can be tested and analysed using several different methods, with HPLC being the preferred method if benzo(j)fluoranthene is required, as this compound coelutes with benzo(k)fluoranthene when analysed by GC-MS.