If you are thinking of buying a home, mechanic shop, gas station, automotive shop or any property which utilizes underground fuel or oil storage, get your soil tested! 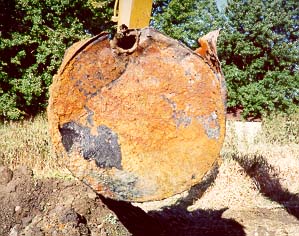 If an underground oil tank at a property is 15-20 years old the chances of a leak are high and you need to have the tank tested. Even if the tank is not leaking now and has not already leaked, if there is an old, buried steel tank at a property you should plan on replacing it before it leaks not afterwards.

Home buyers and property owners should have a soil test performed on your underground oil or fuel tank.  It is recommended to have a soil test rather than a pressure test of an existing oil tank, since even if the tank is not currently leaking because you would prefer an assurance that it didn’t leak before, say from a plumbing connection that was repaired.

Hire an expert to find hidden or buried tanks, abandoned tanks, or to test existing tanks: Specialty companies and some oil companies have equipment to test buried tanks for leaks.  Tanks and soil around and below tanks are tested for evidence of leakage using:

Common oil tank leak tests listed below can tell you if a tank has already leaked and can help assess the chances of an upcoming oil tank leak.  These are just some of the tests performed which can help eliminate the potential of a fuel leak or worse.

Before purchasing a home or property, it is strongly recommended that buried tanks be tested. The liability surrounding a leaking tank becomes the responsibility of the new owner after the property is purchased.  The cost for a soil test on a residential tank generally ranges around just a few hundred dollars or less.  Don’t take the risk of not testing your underground fuel tank or we all pay in the end.